Letters are not case-sensitive
Send
While reiterating its extreme concern about the civilian population in Syria’s war-battered Aleppo, the United Nations refugee agency today said it is also focusing on the rapidly growing shelter needs for thousands of people fleeing the city’s eastern neighbourhoods.

“Many of those who have fled eastern districts are now in unfinished or partly-destroyed buildings. Unsanitary conditions and overcrowding are already challenges in a congested city with few open spaces,” Adrian Edwards, a spokesperson for the Office of the UN High Commissioner for Refugees (UNHCR), told reporters in Geneva.

UNHCR has been providing tents, shelter kits and sealing-off kits to meet the most urgent needs and improve living conditions while also working with partners to quickly rehabilitate structures as temperatures drop. Food, water, medical care and other items are being distributed by UNHCR and partners alongside winter clothing and other relief items.

Jibreen, an industrial zone, has now reached full capacity, with latest arrivals joining some 55,000 people who had already fled the fighting in recent months.

A UN inter-agency assessment in Jibreen has found that 60-70 per cent of recent arrivals were women and children. A large-scale building rehabilitation has been completed in Jibreen. Further work to boost shelter capacity there will be carried out as buildings are declared safe.

Buildings in the 1070 and Rayiada housing complexes in Government-controlled south-western Aleppo are heavily damaged. UNHCR had previously upgraded over 5,000 shelters in the 1070 district. Some are now at risk of collapse and work on rehabilitation is underway.

Additional UNHCR protection and shelter staff arrived in western Aleppo on Thursday to provide a detailed assessment of the needs of the recently displaced.

Mr. Edwards said displacement also continues within eastern Aleppo itself, with many having been forced to move several times.

Since September, UNHCR has supported 838,092 people in Syria, including Aleppo, with winter items, including thermal blankets, sleeping bags, plastic sheets and clothing, but is still unable to reach the many thousands without food, water and shelter in eastern Aleppo.

With its UN partners, UNHCR continues to call for an end to the hostilities to allow safe passage out, and humanitarian assistance to be delivered. 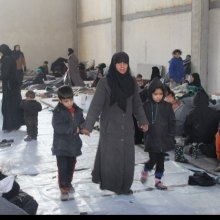