Letters are not case-sensitive
Send
A recently completed United Nations study indicates that during 2016, Israeli authorities demolished or seized 1,089 Palestinian-owned structures throughout the West Bank – including East Jerusalem – thus displacing 1,593 Palestinians and impacting the livelihoods of another 7,101.

Preliminary analysis of the data, gathered by the UN Office for the Coordination of Humanitarian Affairs (OCHA), cites the highest figures for demolition and displacement in the West Bank since OCHA began recording the information in 2009. The overwhelming majority of structures that were seized or destroyed were done so because of a lack of Israeli-issued building permits.

As of the end of November, some 51,000 Palestinians had been displaced in the Gaza Strip following the loss of their homes during the 2014 escalation – a decrease from the 90,000 who were displaced towards the end of 2015. Those who are still displaced depend on temporary shelter assistance provided by humanitarian organizations.

However, the number of casualties and injuries among both Palestinians and Israelis has decreased. As of the end of December, 109 Palestinians and 13 Israelis were killed, down from 169 Palestinians and 25 Israelis in 2015. Injuries were also reduced, most of which occurred during demonstrations and clashes in the West Bank and East Jerusalem.

Throughout 2016, the movement of people was more limited than in the past. According to OCHA, a daily average of 531 Palestinians exited along the Israeli-controlled Erez crossing at the northern Gaza border throughout 2016, down from 602 in 2015 and 26,000 before the Second Intifada in September 2000. The Egyptian-controlled Rafah crossing was opened only under exceptional circumstances, with a monthly average of 3,306 crossings in both directions – down from 25,186 in 2013 before the closure was imposed in October 2014.

There were, however, some improvements in the movement of goods from 2015, although the average truckloads of goods entering the Gaza Strip remained down from 2007, before the blockade was imposed.

The data also includes information about checkpoints and other barriers to freedom of movement, such as earth mounds, roadblocks, and road gates. While the cumulative number of obstacles was five per cent higher than in 2015, the number of permanently staffed checkpoints was lower, thus allowing more movement. 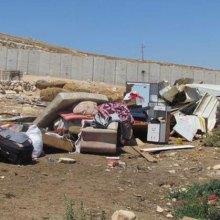