Letters are not case-sensitive
Send
A senior United Nations humanitarian official reported that though damage to Aleppo was extreme, aid workers were nonetheless inspired by signs of optimism and hope, and asked that peace be given a chance.

Phoning into the regular news briefing at UN Headquarters from the war-ravaged city, Sajjad Malik, Acting Resident Coordinator for Syria, told reporters said that while “nothing prepared us for what we saw inside there,” children were coming out of damaged buildings and playing on rubble and that there was “some sense of optimism and hope, because the guns have fallen.”

While UN agencies are still unable to provide an exact number of the people currently in Aleppo, Mr. Malik estimated that some 1.5 million are in the city, including 400,000 internally displaced persons (IDPs). Some four million people lived in the city before the crisis.

“The immediate needs,” he said, “are enormous.”

Mr. Malik said that 106 UN staff members are going in and out of the eastern part of the city on a daily basis and are seeking reinforcements from the capital, Damascus, as soon as possible. Spotlighting the extent of some of the humanitarian activities on the ground, he said that to date, some 1.1 million people have access to safe drinking water, seven mobile clinics are providing medical support, 10,000 children have been vaccinated against polio, more than 1,000 wounded children have been sent to hospitals, and 20,000 people are receiving hot meals each day.

Rubble, he added, needs to be removed, and the conversation has quickly shifted to discuss how residents can begin to rebuild their lives. So far, some 2,200 families have returned.

Yet, many children in Aleppo have gone four to five years without education and are in serious need of psychosocial support – services that the UN International Children’s Fund (UNICEF) has begun to provide in at least one area.

“Give peace a chance, for once. Do not let them have their hopes dashed again,” urged Mr. Malik. “If there are unresolved issues, let them be addressed differently so that peace can continue here.”

He underlined that the last four or five days without violence had already made a huge difference, as evidenced by the optimism of aid workers who have been in the city for months and children who have begun to play in the streets.

Following questions about the security situation in the city, Mr. Malik confirmed that there are Syrian soldiers present and that despite continued checkpoints, UN agencies have access to all but one district of Aleppo, which is not yet open to civilians. Aid workers were initially accompanied by staff from the governor’s office, but are now operating freely.

Mr. Malik reported that agencies continue to be concerned about feeble infrastructure and families who have not yet been reunited, but that they have neither seen nor received reports about crackdowns on returnees.

He also verified that the January plan for the UN Office of the Coordination of Humanitarian Affairs (OCHA) has been confirmed, but that the details would need to be worked out. Meanwhile, he emphasized that agencies would require many more reinforcements and resources in order to meet not only long-term reconstruction, but short to medium-term needs as well.

“There is optimism, there is hope. Peace needs to be given a chance,” he reiterated. 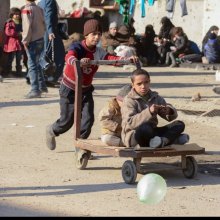 ‘We must be resourced to respond, protect and deliver’ for people of Syria, UN aid chief Syria ,Peace ,humanitarian ,human rights