Letters are not case-sensitive
Send
A joint United Nations agency study has revealed that Syrian refugees in Lebanon remain highly vulnerable and that despite living there for years, their economic situation continues to be difficult, leaving more than a third food insecure.

“Syrian refugees are barely coping,” Amin Awad, Director of the Middle Eastern and North Africa bureau of the Office of the UN High Commissioner for Refugees (UNHCR) said today. “They remain extremely vulnerable and dependent on aid from the international community. Without continued support, their situation would be appalling.”

The study, conducted by UNHCR, the UN Children’s Fund (UNICEF), and the World Food Programme (WFP) analyzes the situation of some 1.5 million Syrians living in Lebanon. It is the fourth of its kind and includes detailed data from visits to more than 4,500 Syrian refugee households in 26 districts throughout the country.

The report found that families have exhausted their resources and are now taking on harmful or asset-depleting coping mechanisms just to survive. Since 2015, there has been a 12 per cent increase in the number of families who are moderately to severely food insecure. 71 per cent live below the poverty line and more than half of families have 5 or more people living together.

et, thanks to $1 billion in aid received as of November 2016, agencies were able to halt a sharper decline into poverty that was witnessed in 2014 and 2015. It also prevented further deterioration in health, education, shelter, water, hygiene, solid waste, and energy conditions. However, that $1billion is only half of the target request from a joint UN, government, and inter-agency appeal for Syrian refugees in Lebanon.

Lebanon is the second largest host to Syrian refugees after Turkey. Refugees live in some 2,125 communities and locations in urban and rural areas around the country, with 71 per cent living in residential buildings, 12 per cent in non-residential homes, and 17 per cent in informal settlements.

The agencies also report that 42 per cent of households are experiencing one or more of the following: overcrowding, dangerous structural conditions and urgently needed repairs, and no toilet. 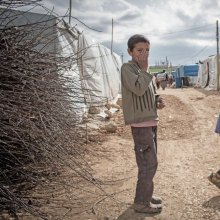 Think of those fleeing Syria and elsewhere not with fear but with open arms and open heart – UN agency chief human rights ,Syria ,unhcr