Letters are not case-sensitive
Send
Nearly 700 people have been moved to hospitals from the frontlines in Mosul, Iraq, as the United Nations and partners are working to scale up humanitarian efforts for thousands of people fleeing the fighting between the Islamic State of Iraq and the Levant (ISIL/Da’esh) and Iraqi forces.

“Trauma casualty rates around the front lines are extremely high,” Jens Laerke, Spokesperson for the UN Office for the Coordination of Humanitarian Affairs (OCHA), told journalists in Geneva. The majority of people receiving medical attention have been brought in with gunshot wounds.

In addition, about 135,500 people have been displaced as a result of the efforts to retake Mosul, with the figure spiking in the past 10 days, according to the latest situation report by the UN humanitarian arm.

“The UN has increased access to the areas that had been retaken,” Mr. Laerke said. He noted that given the “very high risk” of unexploded ordinance, however, aid workers have to wait until the areas are cleared before moving in.

Much of the response is currently in the Government- and UN-managed camps to the south and the east of Mosul, where the majority of the displaced people are sheltering, added Mr. Laerke. The response there is focused on helping people sustain cold temperatures. Anecdotal reports from people who fled western Mosul suggests the ISIL has redirected fuel sources to its military, limiting the electricity available for people to heat their homes.

Despite efforts, however, “there is no humanitarian access to ISIL-controlled areas of western Mosul,” said Mr. Laerke, cautioning that the UN is “very concerned” for the safety, security and protection of the people there.

“It is possible to count, record and assist those fleeing, but it is impossible to say how many remained there,” the spokesperson said in reference to Mosul.

For more than two months, most major trading routes into the western part of the city have essentially been sealed off, resulting in a “siege-like situation” where few goods are available. 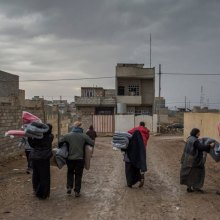