Letters are not case-sensitive
Send
The United Nations refugee agency and its partners are coordinating plans to respond to a potential mass displacement of Iraqis from western Mosul, the latest battleground the Iraqi forces are seeking to retake from Islamic State of Iraq and the Levant (ISIL/Da’esh) terrorists.

“As many as 250,000 Iraqis could be displaced from their homes with the anticipated escalation of conflict in densely-populated western Mosul,” Matthew Saltmarsh, a spokesperson for the Office of the UN High Commissioner for Refugees (UNHCR), told reporters in Geneva.

The military operations to oust ISIL began on 17 October last year in eastern Mosul, which, according to UN agencies on the ground, is now under the Government control.

Mr. Saltmarsh said UNHCR has seven camps completed and two under construction. UNHCR is currently able to provide some 11,000 families, or 66,000 people, with shelter as part of the Mosul response, a figure which should expand to 20,000 families, or 120,000 individuals, in the near-term, once land is allocated.

The refugee agency continues to seek additional land for new camps, reception and transit areas, to assist people closer to Mosul. By the end of March, it is anticipated that the Government of Iraq, working with UNHCR and its partners, could potentially host 41,155 families, or 246,930 people, in camps and emergency sites.

Some 161,178 people have been displaced from Mosul and surrounding areas since the military offensive began in October, but nearly 30,000 of them have returned to their places of origin.

Returnees are keen to resume their lives and told UNHCR that the re-opening of schools and government offices was a factor in their decision to return. In some areas, security and the lack of food and water remain a concern. Some returnees continue to rely on emergency relief items, including kerosene, which they received while in camps.

Inter-agency planning estimates predict that up to 114,000 individuals could be displaced from Hawiga. So far, 82,128 people have fled since August 2016. Until recently, people had been leaving Hawiga in smaller numbers but hundreds are now fleeing eastwards daily towards Salah al-Din and Kirkuk.

UNHCR’s 2016 Mosul emergency response appeal for $196 million was 57 percent funded. For 2017, it is seeking $578 million for its work with Iraqi internally displaced persons and Iraqi refugees in the region. UNHCR has distributed emergency items, including quilts and blankets, to more than 178,000 people, and provided nearly 53,000 people affected by the Mosul conflict with protection assistance. 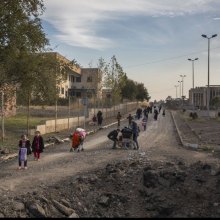