Letters are not case-sensitive
Send
A heart care program, dubbed 24-7, which is being conducted within the framework of a national document to curb non-communicable diseases in Iran has reduced deaths caused by heart attacks, deputy health minister said.

In that regard ambulances will soon be equipped with online electrocardiogram (ECG) services and report the recording of electrical activity of the heart to one of the 54 hospitals across the country and on call cardiologists would diagnose the patients and send them to a cardiac care hospital right away, Aqajani added.

He went on to say that “unfortunately cardiovascular diseases are the leading causes of death in Iran which constitute to 46 percent of the deaths.”

Heart attacks are the deadliest among heart diseases and some 50 to 60 thousand people die of massive heart attack annually in Iran, he regretted.

In 2011, the heads of states gathered in New York and decided to combat non-communicable diseases (NCDs). Following the gathering, the World Health Organization came up with a program that covers four specific categories of NCDs comprising ischemic heart diseases, diabetes, Asthma and Chronic Obstructive Pulmonary Disease (COPD), and cancer and four risk factors which are common across these categories including unhealthy diet, physical inactivity, smoking, and alcohol consumption.

WHO decided to combat these risk factors by taking nine specific measures such as reducing 25 percent of the premature death caused by NCDs until 2025 for age group 30-70 which is called 25 by 25, reducing smoking, increasing physical activity, reducing trans-fat, and providing the essential medication for those suffering from hypertension and diabetes.

In line with WHO’s activities to combat NCDs in 2015 Iran established a committee called National Non-Communicable Disease Committee at the Ministry of Health headed by the Health Minister, Hassan Qazizadeh- Hashemi. There are also six subcommittees affiliated with this committee responsible for controlling cancer, cardiovascular diseases, metabolic disorders, air pollution and inter-sectoral collaboration, traffic injuries, and a subcommittee for monitoring and evaluating whole action plan for the NCDs in Iran. 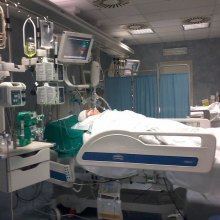 Yemen's health system another victim of the conflict – UN health agency health ,WHO ,right to health

UN delivers live-saving medicines and medical supplies inside Mosul right to health ,WHO