Letters are not case-sensitive
Send
Highlighting the lack of resources for United Nations programmes assisting those displaced by the fighting in Iraq's Mosul Secretary-General António Guterres urged the international community to do more to help the people who have “suffered enormously and go on suffering.”

“This is a moment in which the Iraqi people [and] the people of Mosul need the solidarity of the international community,” Mr. Guterres told the press at the Hassan Sham camp, located about 30 kilometres east of Mosul.

In his remarks, he also drew attention to the severe lack of funding for UN programmes assisting the displaced. Currently, the funding stands at eight per cent.

“[This] shows how limited our resources are compared to the tragedy these people are facing,” noted the UN chief.

According to estimates, there are about 11 million people in need of humanitarian assistance in the country. Of this figure, about three million are internally displaced. In Mosul, more than 285,000 individuals have been displaced due to the military operations to retake the city from Islamic State of Iraq and the Levant (ISIL/Da'esh) terrorists, including some 122,000 over the past month. Cumulatively, more than 350,000 individuals have been displaced since the operations began on 17 October 2016.

Mr. Guterres further spoke of efforts by the regional government of Kurdistan as well as by non-governmental organizations and stressed that international solidarity is vital to improve the conditions of those affected as well as to create conditions for reconciliation within the communities and at the national level once Mosul is fully liberated.

Also highlighting that terrorism is a global threat and terrorist groups are interlinked, greater support from the international community was in everyone's interest.

The United Nations migration agency called for $76.3 million in its IOM-Iraq 2017 Funding Appeal. About $28.8 million, or 38 per cent, will be allocated for the Mosul Crisis Response for the first six months of this year.

The funding will go for camp coordination and management, health, protection, emergency livelihoods and related services.

In the announcement, IOM noted that displaced Iraqis live in shelter which are “inadequate” for the harsh winters and summer weather conditions that vary by more than 50-degrees in temperature. 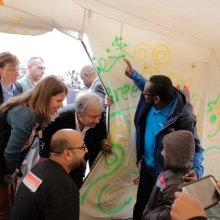