Letters are not case-sensitive
Send
As fighting in and around the Syrian city of Raqqa continues to take a toll on civilians and displaces thousands every day, the United Nations refugee agency has called for greater and sustained access to that it can reach those in desperate need of humanitarian assistance.

According to the Office of the UN High Commissioner for Refugees (UNHCR) overland access to more than 430,000 estimated to be in need across the larger Raqqa governorate remains either cut off or extremely difficult, resulting in need airlift supplies – a costly and complex undertaking.

“With partners we continue to explore all possible supply routes and are working with the authorities to secure greater access to those in need,” Andrej Mahecic, a spokesperson for the UN agency said earlier this week.

However, the situation on the ground is complicated by the number of locations where those fleeing the fighting are taking shelter and the sheer number of new displacements. Last month alone, at least 100,000 people left their homes in search of safety.

Many have been displaced more than once, and tens of thousands are passing through camps or transit sites and quickly moving on to other areas or returning to their places of origin.

According to Mr. Mahecic, levels of humanitarian access vary for security and logistical reasons.

A conflict zone with mines and unexploded ordnance common

On top of access challenges, humanitarian agencies also have to contend with extremely hazardous conditions as a result of conflict and dangers such as mines and unexploded ordnance.

“Funding is not keeping up with needs on the ground,” said the UNHCR spokesperson, noting that the agency urgently requires $37 million to continue to respond to fresh displacement.

The inter-agency Raqqa response plan which includes UNHCR and other UN agencies, also remains severely underfunded, having received only $29 million (less than 20 per cent) of the $153 million needed.

This is a summary of the news: http://www.un.org/apps/news/story.asp?NewsID=56995#.WUTj0HkVTIU 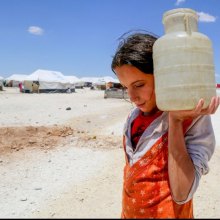