Letters are not case-sensitive
Send
Refugee protection is not a matter of solidarity or generosity, but an obligation under international law, United Nations Secretary-General António Guterres said, detailing five strong appeals to the international community for respecting refugees' rights.

“We are still witnessing many remarkable examples of solidarity in today's world. But at the same time, we are seeing more and more borders being closed, we are seeing more and more refugees being rejected and, namely in countries of the developed world,” Mr. Guterres said in his first press conference in New York since becoming Secretary-General.

Among his calls on Member States, Mr. Guterres urged Governments to manage their borders but to increase their resettlement quotas and protect asylum seekers and people who deserve protection; to seek political solutions to world's conflicts which are spurring the record 65.6 million refugees; and to fund humanitarian aid work.

In line with World Refugee Day, marked annually on 20 June, Mr. Guterres, who was the UN High Commissioner for Refugees for a decade prior, announced that he would be leaving later today for Uganda, which this week hosts a UN-backed summit to support the more than 1.3 million refugees within its borders for the next four years.

Some 950,000 refugees from South Sudan have crossed into Uganda since the start of the conflict in the world's newest country in December 2013. The figure is three times higher than the number of refugees who crossed the Mediterranean Sea into Europe last year, Mr. Guterres said, adding that Uganda not only provides protection but land for the refugees.

In contrast, the UN chief had sharp words for developed countries not doing enough to provide support for refugees or take them in despite heart breaking pleas for food, water and other basics.

Some 80 per cent of the world's refugees are hosted by developing countries with “a dramatic impact” on their economy, society and security, he noted.

“This is particularly worrying, especially when associated to forms of political populism, xenophobia, racism, in which refugees become a target,” Mr. Guterres said, “many times being accused of being part of the terror threat when refugees are not terrorists – they are the first victims of terror, they are fleeing terror; that is why they are refugees.”

“We are talking about two different situations: refugees crossing borders, fleeing conflict or prosecution, [and] economic migrants who aspire legitimately to have a better life and move from one country to another, aiming at a better future for them and their children,” the Secretary-General said.

He added that migration is necessary: “If something is necessary, it's better to control it and to do it regularly than to let smugglers and traffickers be in charge of these movements.”

This is a summary of the news: http://www.un.org/apps/news/story.asp?NewsID=57019#.WUob53kVTIV 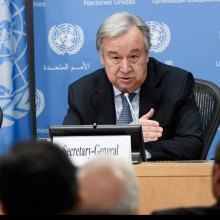