Letters are not case-sensitive
Send
Even as schools and markets begin to re-open in war-torn eastern Mosul, whole neighbourhoods of the western part of the Iraqi city have been destroyed and nearly a quarter of a million people have nowhere to return “anytime soon,” a senior United Nations official said.

Speaking to the press in Geneva, Lise Grande, the UN Humanitarian Coordinator for Iraq, said the contrast between the east and the west of the city could not be clearer. Indeed: “Everyone's gone home to eastern Mosul except for 20,000 people.”

“Mosul's really a tale of two cities. Eastern Mosul is a city that's recovering, people are home, schools are open, businesses are open, markets are open. Conditions aren't great but it's a city on the mend,” she said.

Yet, the situation is very different in western Mosul, explained Ms. Grande, who is also the Deputy Special Representative of the UN Assistance Mission for Iraq (UNAMI). “In the 15 completely destroyed neighbourhoods, there are 230,000 civilians who come from those districts who are not coming home anytime soon.”

Overall, she said that Mosul, which had been the site of the single largest urban battle since World War II, had also witnessed the largest managed evacuation in modern history, with nearly one million civilians assisted out of the city. “Very exceptionally, humanitarian agencies were not near the front line, they were on the front line,” she stated.

In all, some 3.3 million people across Iraq remain outside their homes, including those recently displaced from Mosul. In the wake of the Iraqi campaign to oust the Islamic State of Iraq and the Levant (ISIL/Da'esh) from Mosul, she said that there are three more military operations that are expected: in Tal Afar; in Hawija; and in the Euphrates Valley, western Anbar Province.

“ We think that by the end of those military operations several hundred thousand more civilians are likely to be displaced. [As such] when the military campaign in Iraq is over, we are possibly looking at 3.5 million civilians who will need to go home,” she said. 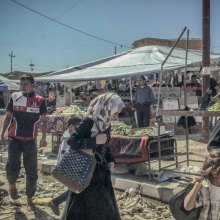