Letters are not case-sensitive
Send
Daesh (ISIS) takfiri terrorists have beheaded an Iranian military adviser in Syria, two days after capturing him near the Iraqi border.

Mohsen Hojaji, a member of the Iranian advisory support team in Syria, was captured by terrorists on Monday near the Tanf border crossing in southeast Syria.

Daesh released a photo of Hojati before his execution. The act prompted widespread condemnation of the terrorist group as well as admiration of the soldiers who are fighting against it.

Following the incident, Foreign Minister Mohammad Javad Zarif in a post on his Instagram said Hojaji and other martyrs have sacrificed their lives to defend innocent Muslims and fight the atrocities committed by takfiri terrorists and their supporters.

In a separate note, the Foreign Ministry spokesman expressed his condolences to the family of the slain soldier and the Iranian nation.

In his message, Bahram Qassemi said the outcome of Iranian servicemen’s bravery in fighting Daesh is stability, security and peace in Iran’s borders as well as dignity and empowerment for the region’s Muslims.

“Now, it’s our duty to once again shout loudly at these merchants of death and terror and promoters of extremism and terrorism, and unveil their true, ugly faces before the whole world,” he said.

Since takfiri terrorists emerged in Iraq and Syria, Iran has been providing advisory assistance to the two countries’ armies in their fight against the terrorists.

Major General Qassm Soleimani said Thursday that Iranian forces will not rest until they have taken out every last terrorist from the face of the Muslim world.

General Soleimani, who commands the Quds Force of Iran’s Islamic Revolution Guards Corps (IRGC), pointed to the incident, saying the “horrific, inhumane crime” came in the wake of successive blows dealt on several fronts to Takfiri-Wahhabi terrorist groups, which are linked to the world’s imperialist power.

“The atrocity does not fall within any Islamic, or even humanitarian, principle or law,” he said.

Such acts would further strengthen the Iranian servicemen’s resolve in pursuit of their cause “to purge every inch of the Muslim territories of their (the terrorists’) evil presence”, the general noted.

He also said Iran is proud of such martyrs who sacrifice their lives in the path of fighting oppression, comparing them to Imam Hussain (AS), the third Shiite Imam who was beheaded in the Battle of Karbala’ on 10 October 680 by Yazid's army. 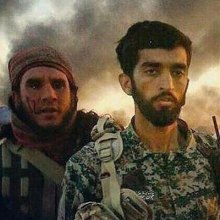