Letters are not case-sensitive
Send
Amnesty: You’re not given any way to prove who you are or where you’re from, which restricts your ability to gain full citizenship status. Wherever you try to find refuge you’re locked up in detention because of who you are.

Who are the Rohingya refugees?

They are the people with no home or citizenship. While the Myanmar Government dispute the Rohingya people's status as Burmese citizens, it's indisputable that Rohingya people have been living in Burma for generations. Also indisputable is their displacement across the Asia-Pacific and ongoing abuse and exploitation. According to the UN, they are one of the most persecuted minorities in the world.Three years ago, religious and ethnic tensions between the Rohingya Muslims and the Rakhine Buddhists, who make up the majority of the population, escalated into widespread, deadly rioting.

Rejected everywhere they seek safety, hundreds of thousands of Rohingya people are now living in limbo across Southeast Asia.

How many displaced Rohingya people are there?

In 2012, an estimated 140,000 people were internally displaced within Burma, and almost 86,000 made the hazardous journey into neighbouring countries.In an attempt to flee the violence, the Rohingya people have become among the world’s least wanted, denied resettlement in Indonesia, Thailand, Bangladesh, Malaysia or Australia.These people are risking everything for a chance at safety, many dying at sea or in overcrowded detention.

Rohingya women and children, like Yasmine, a Rohingya woman forced to flee Burma with her young children, Amina, six and Tasmin, three, are at great risk of danger.They are trapped in a tiny room on the outskirts of Bangkok, living in constant fear the Thai authorities will arrest her and deport her back to the violence and persecution in Burma.Her journey – like many others – was horrendous. She knew the dangers of escaping the conditions in Burma, but for her and her children, she had no choice.Yasmine and her children boarded a fishing boat late one night, hoping to register as refugees and be resettled in Malaysia. Instead, for 16 days, the family suffered seasickness and overcrowded conditions before they were taken to Thailand.Those who reach Malaysia often face life in with filthy and crowded detention centres. They have no timeline for their stay and have little access to proper healthcare, food or clean drinking water.Though few Rohingya people can afford the boat journey to Australia, some Rohingya refugees have little option left but to travel here, to Australia. After a dangerous and desperate journey for a better life, they face some of the harshest policies towards asylum seekers.

Why are the Rohingya stateless?

A Burmese law passed in 1982 denied the Rohingya people of their citizenship. The Burma Citizenship Law denies their rights to a nationality, and subsequently, removes their freedom of movement, access to education and services, and allows arbitrary confiscation of property.To Burma (and the rest of the world it seems), the Rohingyas are not people. They are stateless. Without the proper required identification documents, they have no chance at being a citizen anywhere.For families like Yasmine and her children, their only form of identification, a household registration card, was taken away by authorities and never replaced.This meant no identification and no rights. The only option for Yasmine’s family was to leave.

This year alone, thousands of Rohingya people were pushed into crossing the dangerous, 2,000 kilometre-wide Bay of Bengal, off the coast of south-east Asia – many became stranded at sea. 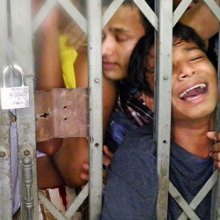 Rohingya
“ Rohingya people: the most persecuted refugees in the world ”
Share to
Tags RefugeesRohingya
Related Contents

UN scaling up assistance as number of Rohingya refugees grows to over 400,000 Rohingya ,Refugees