Letters are not case-sensitive
Send
United Nations health agencies have delivered critical medicines and medical supplies to treat almost 13,000 people in the Iraqi city of Mosul, where the Government forces have been staging a military campaign against Islamic State of Iraq and the Levant (ISIL or Da’esh) terrorists.

According to the World Health Organization (WHO), the agency and the UN Population Fund (UNFPA) delivered medicines and supplies to treat both trauma injuries as well as antibiotics, medication for chronic conditions and reproductive health items.

The agency also reported that a primary health care centre, managed by the Ninewa Directorate of Health, is providing urgent medical services for more than 50,000 people in east Mosul but owing to limited health services in the area, the health centre is also serving nine other neighbouring suburbs with a total population of almost 150,000 people.

The health centre is served by seven doctors, including internal medicine specialists, general surgeons, paediatricians and an anaesthesiologist – but almost all work without pay, as volunteers. They see up to a thousand patients a day and about 10-15 have mortar shell injures.

The centre, however, faces considerable challenges, including water, fuel and power shortage and has been forced to close temporarily on several occasions over the past few weeks as a result of mortar shelling, said WHO.

The UN health agency has also provide ambulances to transport those injured to the nearest supported trauma stabilization point in eastern Mosul, before being taken to hospitals in Erbil (at least two hours away). 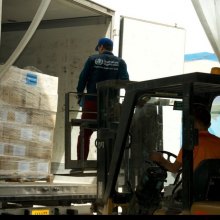 Gaza's cancer patients: 'We are dying slowly' human rights ,WHO ,right to health